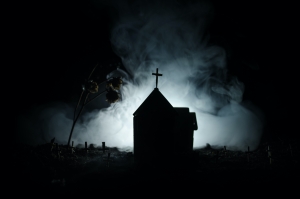 Since the beginning, humanity has been the subject of the battle between God and Satan. Adam and Eve first dealt with him in the garden, then Cain after the fall. Noah’s contemporaries were so stricken by the influence of the devil that they were destroyed for their wickedness. Throughout the Old Testament we see the enemy at work attempting to destroy the work of God. Even Jesus went face to face with the devil. The devil attacked him, attempted to trick him, and continued to assault him throughout his earthly life. And the church has not escaped the wrath of Satan.

Consider that the Lord, when He threw Satan out of heaven relegated him to the earth. He drew the boundaries for the devil at the four corners of the earth. Then, into the midst of this battleground, Christ established his church. This is like the Allied forces of WWII establishing their headquarters in the middle of Berlin. Imagine, if this happened how many attacks would be leveled at the headquarters. This is the exact situation we find ourselves in. We, the church of Jesus Christ, have been placed in a world ruled by the devil who hates the church and the work of Christ. He is in battle against it. He wages war against the church. He attacks the church.

Be sober-minded, be alert. Your adversary the devil is prowling around like a roaring lion, looking for anyone he can devour. Resist him, firm in the faith, knowing that the same kind of sufferings are being experienced by your fellow believers throughout the world. – 1 Peter 5:8-9

Right now spiritual battles are being waged. There is a battle taking place as Satan attempts to distract you from the word of God, as he attempts to draw your concentration away. He puts forth great effort every Sunday to destroy the worship and Bible Study time in your church.

The goal of the enemy is to destroy the church. He wants to devour the church and Christians. He prowls like a lion, looking for prey to completely annihilate, physically and spiritually.

He has used this strategy from the beginning of man. Remember how he divided Eve from God. He divided Adam from Eve. Then he divided Cain from Abel. He separated Lot from Abraham and Judas from the disciples. He divides husbands from wives and children from parents. He separates friends from one another and Christians from the church. He wants to get you alone. He wants to remove you from the positive influence of the church. He wants you to doubt other Christians, to be bitter with brothers and sisters in Christ, to fight with your neighbor. He will strive in getting you to think evil of a brother tomorrow for whom today you have love and respect.

And do not think that you are immune from his attacks. As was mentioned earlier, he went after Jesus. Adam and Eve walked as friends with God in the garden, conversing and learning from him and they were convinced that God had lied to them. Judas walked with Jesus, the man, for three years and then betrayed him. Satan is much smarter than you, much more skilled at tricking than you are at avoiding. He has felled many women and men greater than you. Do not be fooled into thinking that you are too good for him.

But that does not mean that you must inevitably fail. In Christ we already have victory. In  Christ we live victoriously. Because I am in Christ, Satan cannot win ultimately. My striving is to not lose the small battles today knowing the ultimate victory is already decided.

Want to join the discussion?
Feel free to contribute!

The Day of Atonement Armed to Endure
Scroll to top